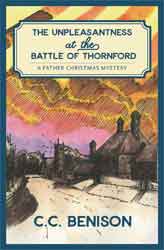 When a costumed, pike-spiked body turns up after a traditional historic reenactment of the 1645 Battle of Thornford, Father Tom Christmas and the villagers of Thornford Regis find themselves in a battle of their own as they deal with events from the murky, more recent past.

The Unpleasantness at the Battle of Thornford is a non-canonical Father Christmas mystery. The events described take place shortly after those in Ten Lords a’Leaping.

“As far as I’m concerned, Father Christmas is welcome all year round, and the more often the better!”
–– Miranda James, New York Times and USA Today Bestselling Author

Start a Blog at WordPress.com.